For a free LAB Profile® Assessment,
great communication tips, get my Irregular Newsletter »

Why this probably isn’t the end of the world as we know it.

If you are getting the news, hanging out on Facebook, or just having conversations about current events you’ve probably noticed that the tone has changed dramatically. Depending on one’s point of view, people seem to be elated, panicked or have gone into hiding as a result of the 2016 US elections. There is a lot of shouting going on.

Protests in the US went on for days after the election. Many of my friends on Facebook are predicting dire consequences of a Trump Presidency. Media from around the world has been alternately between blaming Clinton campaign strategy, the FBI director, third party candidates for this election result and engaging in hand-wringing or panic-based predictions.
As I’ve been in Berlin for a little while, I caught the cover of Der Spiegel, Germany’s weekly news magazine with the title: 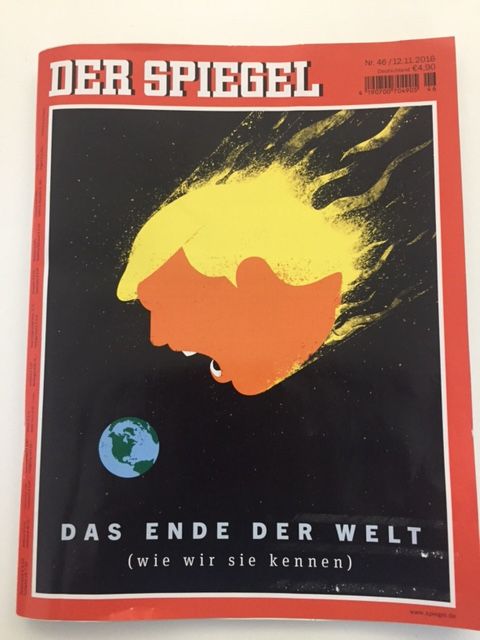 “The End of the World as We Know it” from R.E.M.’s famous song.
(Transparency alert: I would never have voted for Donald Trump and have been an ardent Hillary support, but I’m Canadian and British, so it is irrelevant.)
BTW for a completely different explanation of the result,
check out my niece Jessica Rose’s piece posted on the Berkeley School of Law Blog.

I think we all need to chill out and accept the result of the US election. Why? Because it is just possible that this is not actually the end of the world as we know it.

These events have been going on right when I am in the middle of
putting myself through Byron Katie’s self-inquiry process.

And if there is one thing I am learning about from this psychological cleansing process,
it’s that whatever is happening,
IS the current reality and that
we make ourselves miserable by thinking
about what should have happened instead,
bemoaning the lamentable current state of affairs,
and whining about how we want it to be – but it isn’t.

These are hard lessons to learn. Many people really believe that this result shouldn’t have happened. Maybe they are right – but it’s irrelevant. It did happen.

Here are some of Byron Katie’s inquiry questions
that force us to face reality as it is,
instead of suffering because of our thoughts and beliefs about it.

So if you’ve been thinking as I did:

“This is a terrible outcome for planet earth in general and the good American people specifically,”

Byron Katie would ask: “How do you react when you have that thought?”
I feel worried, anxious, and stressed out about all the terrible things that could result from a Trump presidency – naturally.

Then she would ask: “Who would you be without this thought?”
I would be more relaxed and able to see all the positive events that are happening in the world to make it a better place, and not only the events that I believe are depressing.

I’d be able to remember great things that are happening such as:
– advances in our understandings of how people function and what they need to be fulfilled,
– people who have been isolated from the world, getting access to broad band internet, enabling them to connect, earn a living and more fully participate,
– women more fully taking leadership roles in key corporate and government positions,
– greater awareness of how our habits affect the environment and what we can do about it
– being able to keep in touch with people I love all over the world, whenever I want.

Once I got to this place – one of being able to see what else of a more positive nature is going on in the world – I suddenly realized that when I was participating in the growing awfulizing, I was completely denigrating the capacity of people to be creative, resilient and forward-thinking.

Now that I think about it, this planet has more potential than problems. Every time one of us makes a real connection with another, we improve something. When we communicate online to many, we have the possibility of making a positive difference.

As the late Canadian politician Jack Layton said in his last letter to Canadians:

We can do this!

22 thoughts on “Why this probably isn’t the end of the world as we know it.”

Find out what people are saying »

Thank you, Shelle, for the amazing information you shared with us last night. My mind is spinning with all the ways I can put it into practice to make my life better, both at home and at work!

“The dream of making the LAB Profile® the cornerstone of my business and everything I do has now come to fruition. Of all the courses and investments I have made in my development over the years, your program has given me the biggest return on investment. I’m now so successful that I’m reaching full capacity.”

“By far the most popular and most appreciated keynote was run by Shelle Rose Charvet! This is what I hoped and expected and for which I’m truly grateful.”

“This was an excellent program- Shelle is superb, she makes the material come alive and goes way beyond expectations.”

I highly recommend the LAB Profile Consultant/Trainer and Practitioner course. It is the most powerful and fun learning programme I have been on and worth every bit of personal, physical and intellectual investment. It’s more than a tool kit, it’s the complete multi-function personal development tool and needs no batteries!

I met Shelle for the first time ever, at a recent conference in San Francisco, where I had the pleasure of hearing her deliver a keynote. Shelle is one of the best presenters I have encountered in a long time. If you ever get a chance, do pop in on one of her workshops or presentations.

The program is great, and met my expectations to come from my country to learn it. Shelle is warm, thoughtful, pays attention to participants and she cares. She is great!

Shelle’s provocative and dynamic presentation style kept the group of mediators in attendance (many of whom are hard to please lawyers) completely engrossed. Shelle provided us with a whole new perspective on the topic and left the audience thirsting for more. Shelle has the special ability to both challenge and engage her audience. A true professional!

A very successful program, I got all the tools and knowledge that I needed which is the basis for working with the LAB Profile®. Thanks, the program was great.

A wonderful program that is valuable and insightful on both a professional and personal level. I will be able to make an immediate application to my presentation skills and the course materials are designed for future application in coaching and interviewing managers for development programs. The best workshop I have ever attended in my professional career. Shelle is without equal; truly unique.